With autumn on its way and the dark nights closing in, I decided it was time for another adventure.  Looking at my list of dream travel destinations, I chose to visit the Amalfi Coast. A short flight from the UK of around 2.5 hours and in October, many of the summer crowds have already visited but the sunny weather is still around. I flew with TUI who had a shiny blue hairyplane with lots of leg room and perfectly timed daytime flights so I wouldn’t get too tired or lose any time for adventuring.

Landing into Naples airport was very scenic, I was lucky enough to have a view of the vast city and rugged coastline, not forgetting the mighty Vesuvius volcano.  The bus ride from the airport to my Hotel in Maiori took around one and a half hours.  I will warn any chronic illness adventursauruses considering visiting the Amalfi coast. If you have vertigo, motion or travel sickness, avoid travelling by coach if possible.  The roads are very windy and tight, and lets say Italian drivers don’t believe in stopping to let someone pass safely.  The roads along the Amalfi coast are right on the edge of the cliffs, the views are beautiful but it’s scary to look down the 200 foot drop into the Tyrrhenian Sea.

The hotel I had chosen was the Pietra di Luna, and prior to arriving I had done very little research into where I would be staying. Luckily, it was in the most perfect location. Across the road from a sand and shingle beach. About 100 metres to the bus stop and 200m from the main street in the town. Pietra di Luna is an authentically Italian hotel, with white washed walls and stripy awnings.  The hotel has 4 floors of rooms and 2 lifts, they were so tiny for once I actually chose to take the stairs and a ramp at the front of the hotel for getting in and out.

There was also a really big swimming pool with deck chairs dotted around to enjoy the sunshine.

The room I stayed in had a huge balcony overlooking the sea! I had seen some of the reviews on tripadvisor about the beds being really hard and uncomfortable. The maid brought up the matress covers  shortly after I checked in and left presents on all the pillows.  She also changes the pillow cases daily and the towels in the bathroom twice a day.  It’s such a lovely touch finding the maid has opened up the bed clothes each night. 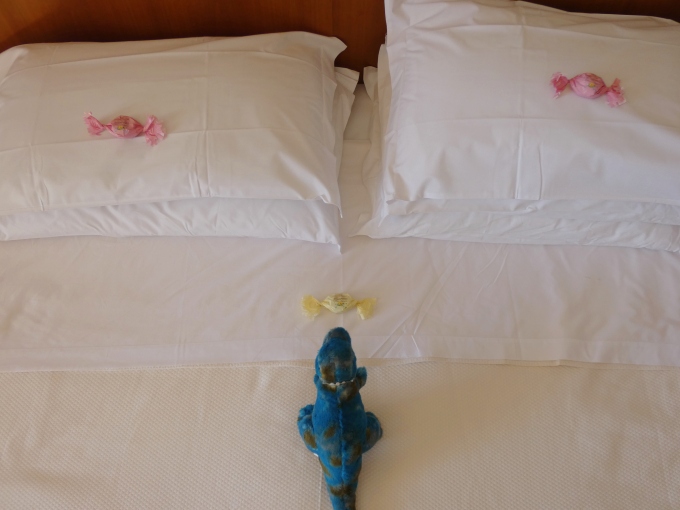 Another silly comment I found on trip advisor was the “seizure inducing” tiles on the walls in the bathroom. Some humans are very strange, I liked the decor, and I have to say if you want modern interior design don’t come to Italy.  I like the vintage look of the rooms and I especially love the dinosaur sized bathtub, which came complete with smaller bath towels. 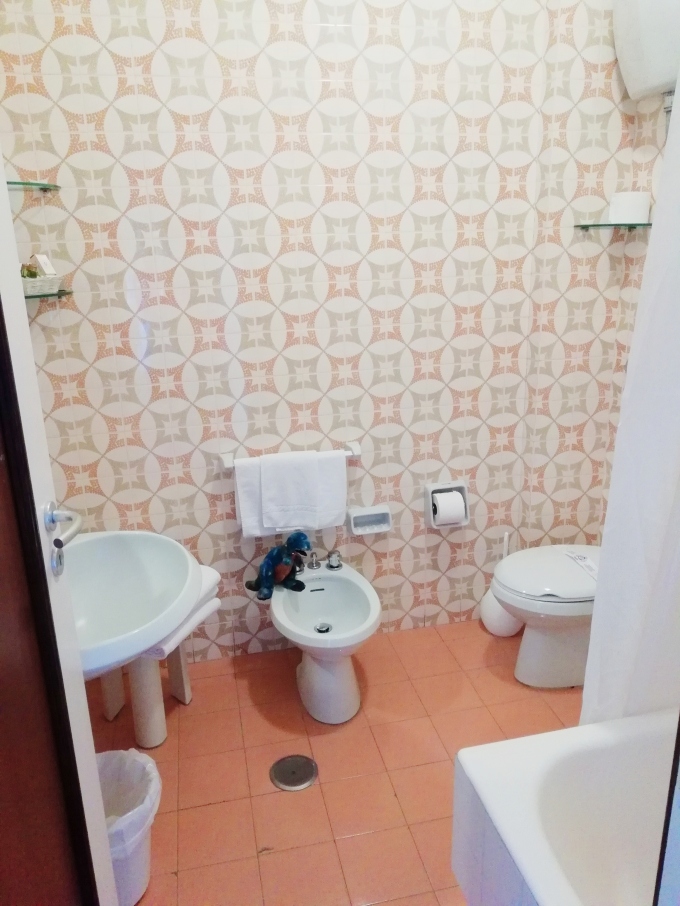 A thing so good, it gets it’s own title. The view, a panoramic and beautiful view of the whole Bay of Maiori. Starting with the Norman tower to the left, following the beach all the way along to the Miramare Castle and on a clear morning I could see all the way to Atrani on the outskirts of Amalfi.

My favourite part of my whole stay in the hotel was waking up early to watch the sunrise over Salerno to the sound of the waves lapping the shore. I was indeed a very lucky dinosaur because I could also watch the sunset over Atrani. I love watching the city lights twinkle whilst the sky paints itself the most beautiful shades of orange.

The hotel has its own private sand and shingle beach which has a lifeguard, changing rooms and you get a towel with your Sun bed. The beach was never crowded so I was able to relax completely. I liked watching the many boats and yachts bobbing around. The sea itself was cold but very refreshing, however the current was really strong. My photographer was soaked by a giant wave one day, much to my amusement.  The beach was a combination of black sand and shingle (stones), so if I return I need to get over my fear of flip flops and take some to wander about in. 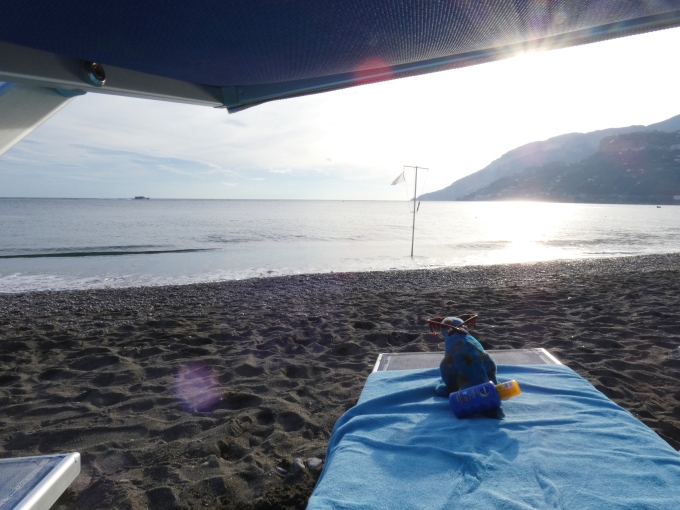 Not all days were this relaxing, unfortunately there were many forest fires around this area so on some days I was able to watch the military planes filling up with water to put out the fires. 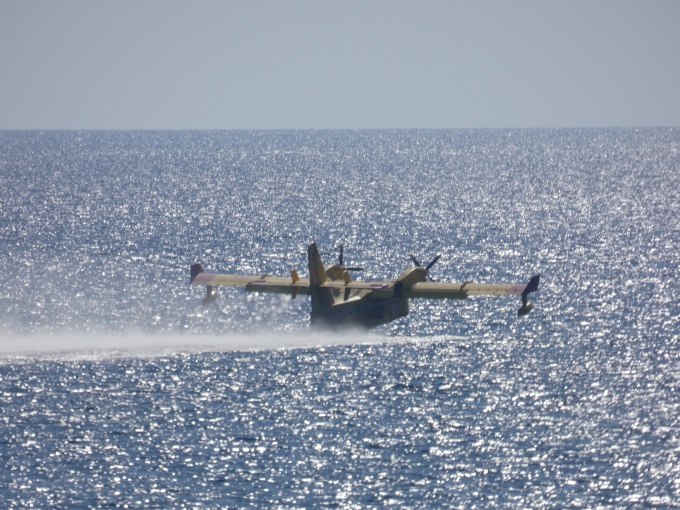 The restaurant was fabulous and the waiters couldn’t do enough to help. Even when really hungover from the Napoli-Liverpool football game. My last stay in an Italian hotel was fraught with many issues due to me being a veggiesaurus. The chef was happy to go off menu for me and made some incredible dishes. I have the say the Aubergine parmigiana and chocolate eclair was possibly one of the best meals I have had in a hotel restaurant.  Another quick mention was the gluten free table during breakfast was a fabulous idea and a rare sight in many hotels.

I had initially decided to stay in Maiori because it is in the centre of the Amalfi Coast and has the biggest beach of all the towns in the area. However, I was very surprised to find the town is flat with very few hills to climb.  Making it the perfect place to stay and use as a base to explore without having to climb huge hills (unless you want too).  I’m planning a couple of hikes to other towns, stay tuned for more about those.

Nestled among the blocks of flats, shops and many cafes lining the Lungomare Amendola (seafront).  The bus stop being so close to the hotel makes for the perfect base for exploring the more famous UNESCO towns of Amalfi, Ravello and Positano.  As well as the big cities of Salerno and Naples. And, not forgetting the world famous historical sites of Pompeii and Herculaneum.

This really is a fabulous choice of hotel and I am looking forward to seeing more of the area and watching many sunsets from the balcony.  I would recommend this hotel to any chronic illness adventuresaurus wishing to visit the area due to the accessibility of the hotel and all of its amenities.

Resfeber  (n.) The restless race of the traveller’s heart before the journey begins

8 thoughts on “An Italian Adventure to the Amalfi Coast”