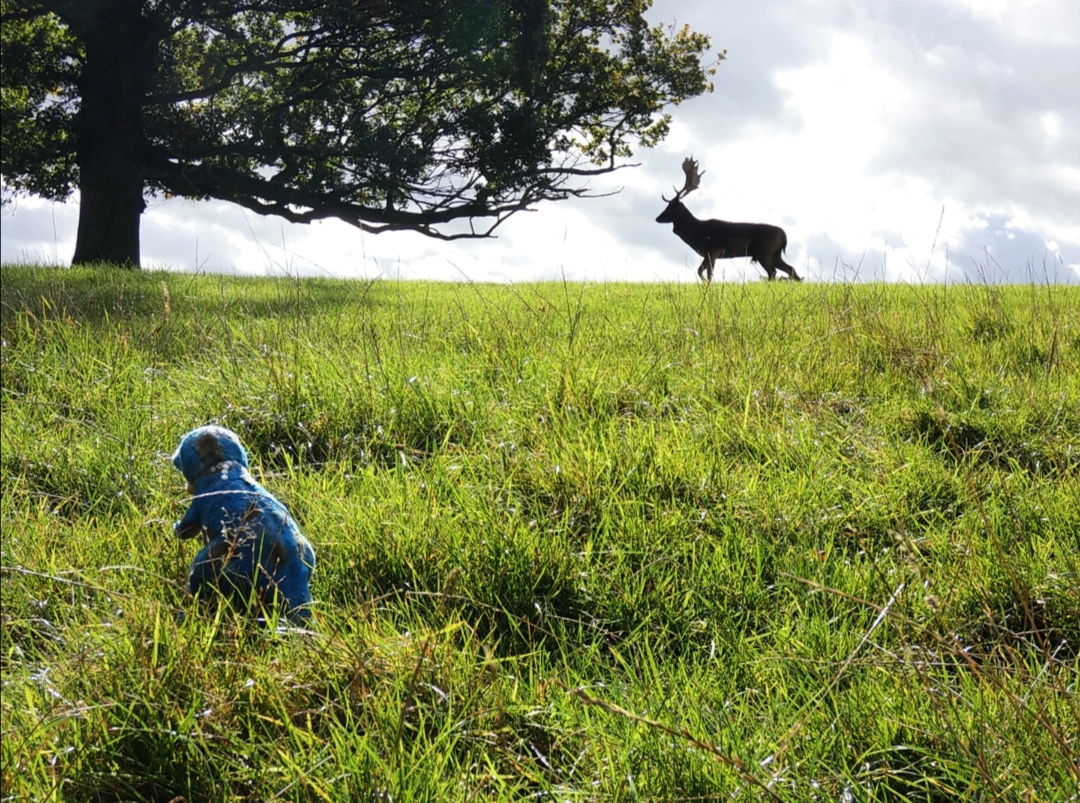 I love autumn, the cool sunny days, orange hues and of course the crunchy leaves. Recently, I realised how little I have explored near where I live. So when the chance of very cheap tickets to visit Raby Castle came my way, I jumped at the chance.

Raby castle is located in County Durham and is was built in medieval times. Nowadays it is a seat of Lord Barnard and his family. The castle itself is only open at set times of year, so I was unable to go in. But, that didn’t bother me because I was going to visit the grounds and the residents. Including one who is very famous!

Before arriving I hadn’t done much research. Though I did get a map at the ticket desk, I’m glad I got a map because there are 200 acres of parkland to explore. Leaving the coachyard behind, I decided to head straight into the parkland and leave the walled garden until last.

The castle is beautiful, built in the 14th century, the original castle still stands today. The moat no longer surrounds the whole castle nor is the drawbridge used to enter. The castle turrets peep out behind ancient trees and reflect beautifully upon the ornate lakes. Some of the settlement dates back to the 11th century when it was the settlement of the Viking King Cnut. When walking around most of the parkland, the castle is visible, so it is hard to get lost. I visited on quite a sunny day so the castle reflected off the low pond beautifully.

Sadly, I had to miss out the high pond due to the giant, scary, horned cows milling around. They kept making angry noises at those who went too close because they had small calves in their group. The deer in Raby Castle grounds are descendants from deer first brought to the area in Norman times. Detouring through the grass I made a few friends! The fallow deer are very friendly and rather inquisitive. I had a lot of fun watching the deer race each other across the grass (I would have joined in but the grass was a bit too long). Instead I chose to seek out some of the bigger deer with antlers who were relaxing in the sunshine in front of the castle.

Next up I decided to search for one of Raby Castle’s most famous residents (not you Lord Barnard!), a young leucistic deer. I’d heard a few people call the deer an albino but he isn’t. The only part of this deer which is different is his white fur, and his incredible hiding skills. Although he was the only deer with white fur, it took me an hour of searching before I managed to find him posing at the top of the high pond.

Once I had found this deer he decided to follow me around the rest of the park. I think he knew I was different too, most dinosaurs are green rather than blue. Leaving the ponds behind I decided to go up to the other side of the park where there were less humans to scare the animals. It was rather desolate, no fallow deer came to this side of the park. All I saw was a hare jumping about in the long grass, so I was going to turn back. Then I heard some rather weird noises, I thought it sounded like moo but my photographer thought it was a honk. Long story short, I found the red deer huddled together under some trees. I know I shouldn’t compare as they are totally different animals but I think I liked the fallow deer more, since they were more fun. The red deer were very photogenic though.

Last up was my visit to the walled gardens which date back to the 18th century and were designed by Thomas Wright. I wasn’t expecting much given it is autumn but I was greeted with a garden filled with colour. The orange paper lantern flowers were my favourite, followed closely by the beautiful dahlias.

The flowers are able to grow because the walls are heated, some tropical fruit is able to grow (a great feat of Victorian engineering). After getting lost among some rather interestingly shaped hedges, the cold weather started to set in. I decided it was time to go and search for somewhere to warm up.

The stables is now a small cafe and gift shop. I stopped for a coffee and slice of cake prior to heading home. It made me sad to see venison on the menu but I will hold on to my deer are friends not food argument for another day. I’m beginning to enjoy autumn a lot more than I used to but I will always prefer warm summer weather.

2 thoughts on “Roaming around Raby Castle”