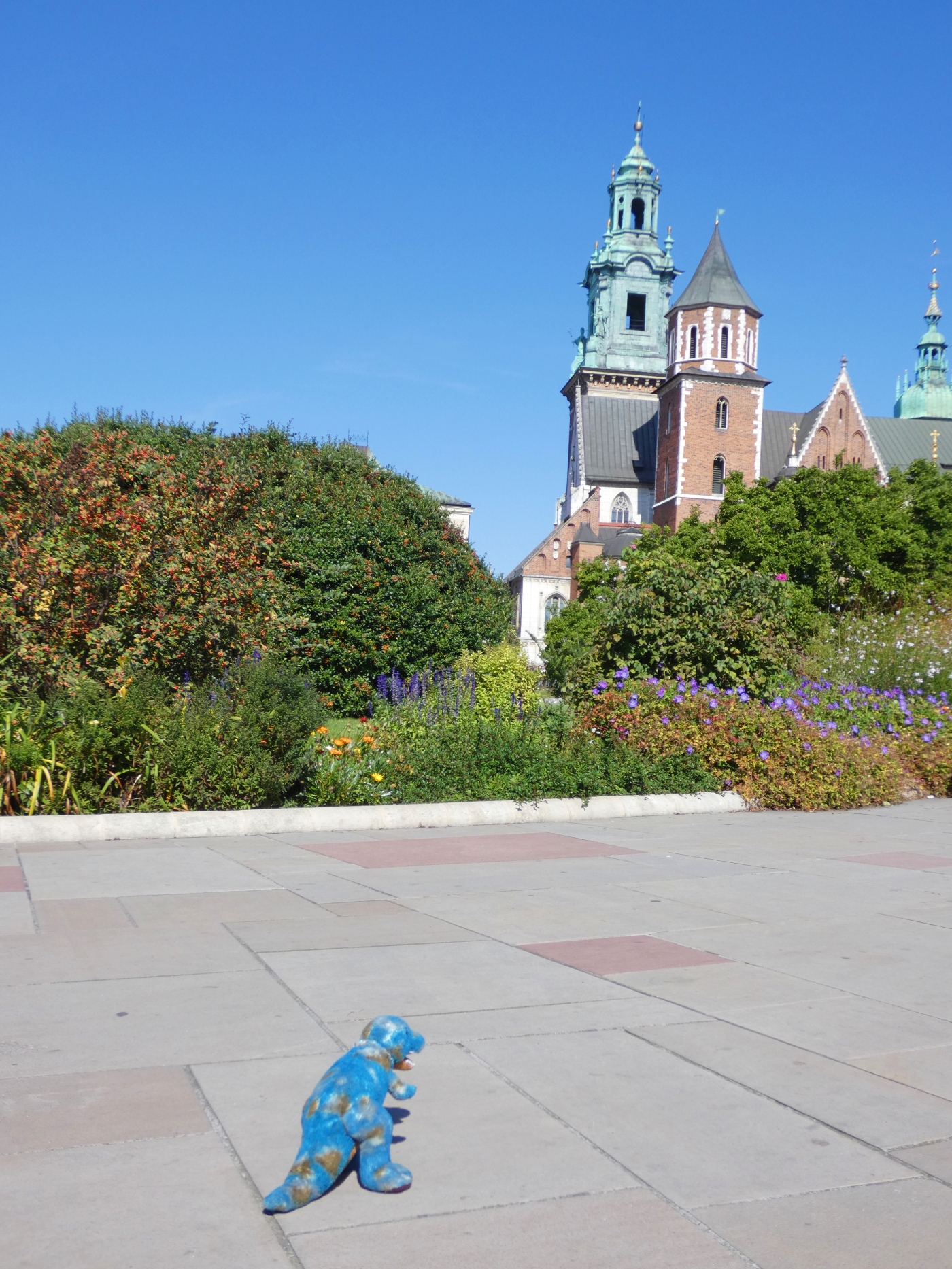 I finally allowed my photographer out of quarantine so I could go and explore Krakow. I hadn’t really planned much before this trip, so over breakfast, I had a quick look at the place mat map. After a healthy breakfast of cake and coffee; the place mat, my photographer and I went off to explore the city. I had heard rumours of a fire breathing dragon which I was hoping to find. After being greeted by a beautiful sunset when flying into Krakow, I realised how big the city actually is. Krakow is made up of 18 districts and is an amalgamation of Kazimierz, Kleparz and Krakow. Krakow was founded in the 7th century A.D. when a group of Slavic people began to live atop Wawel hill, making it one of the oldest cities in Europe. This has allowed Krakow to gain a massive 6000 historical sites, a few too many to visit in one trip.

To ease myself into a new city gently I chose to walk along the riverside towards the historical centre of Krakow. The weather surprised me on this trip, I had brought my jumper because I thought it would be cold. The summer crowds may have left but the sunny weather stayed, September really is a great month to travel. Cities often give off a hectic and busy vibe, but Krakow has an energy that is cool, calm and eclectic.

Leaving the riverside after a 2.6 kilometer walk brought me to a green area. I knew I was close to something exciting because there were several walking and segway tours hanging around. Being rather short, all I could see was a big wall, so I continued on along the riverside.

That’s where I found the dragon! Smok wawelski stands next to a small secret passageway into the castle walls. I like to think he helps guard the castle, but the legends say otherwise. When I first arrived he was standing quietly letting the tourists pose for photographs. After a while I think he got a bit sick of all of the humans surrounding him because he started to breath fire to scare them all off! I decided to leave after this and see if I could work out how to get into the castle.

Much to my disbelief, it’s free to walk around the castle grounds, you only pay to enter the exhibits. I got there around 10 am and it was rather busy, Saturday must be a popular day. I entered next to the Tadeusz Kościuszko Monument because the hill didn’t look as steep as the other.

The views both inside the castle and cathedral, as well as across the city are beautiful. Following small paths ended up leading to some beautiful views, I could have easily spend a day here. The sunset is meant to be beautiful from here but sadly I didn’t have enough time to come back and see it.

This is the place where all of tje tourist photographs are taken, it is beautiful but a bit too crowded for my liking. It is one of the largest medieval squares in Europe which is filled with pigeons.

I made the rookie mistake of visiting early afternoon, the restaurants were full and there were humans everywhere. The pastel coloured buildings which line the square are simply stunning and give a nice back drop to the towers and horse drawn carriages.

In the centre of the square is cloth hall, a rather unique building which now houses tourist tat stalls. I did notice a knife hanging from the ceiling of the building. This murder weapon has been hanging there since the 13th century when a fight started between two brothers building St Mary’s Basilica. One tower is bigger than the other, which caused an angry brother to kill the other.

The views over the square from at Mary’s look spectacular but the views from Zara are just as good (and free). Plus there is a beautiful old lift to ride in to avoid the stairs.

Food and a rather famous staircase are the only things which brought me to this district. It is steeped in history but sadly felt a bit run down and sketchy, 500 years of Jewish life was destroyed here in WW2. There is an abundance of bohemian cafes and restaurants, to me it was the place to eat (especially Josefa street). Even though the area is predominantly Jewish, there is a beautiful church in the centre. Corpus Christi Basilica provides an air of grace to a busy city. It is filled with ornate and beautiful gold alters, well worth a peep inside.

Heading up the main street of the area took me to planty park where I located Krakow barbican which I found slightly disappointing. I read it as barbeque (oops).

Leaving planty park by a different path took me away from Stare Miasto through the nice residential area of Wesoła Zachód. This took me on to the Botanic gardens (Orgód Botaniczny Uniwersytetu Jagielloñskiego). It costs 9pln to enter and is well worth spending an afternoon wandering through the glasshouses and gardens.

Heading down to the riverfront at Podgórze took me to Father Bernatek’s Bridge which has several acrobatic humans climbing it. From here I headed over to the final district I had time to explore.

More commonly known as the Ghetto, I was initially unsure if I even wanted to visit. I started my short tour of the area with a visit to Limanowskiego street to see the ghetto wall. It’s a scary thought thinking humans were walled into a tiny area. Then it was off to the Plac Bohaterow Getta, also known as heroes square. A place with oversized bronze squares to commemorate the Jewish people who suffered an unknown date. It represents departure and absence. It is built on the spot where inhabitants were rounded up and and sent to concentration camps during the liquidation of the ghetto. I was expecting to feel raw emotion here but it was lost due to the crowds of students sitting on the floor and on the chairs. Visiting later in the day meant the shadows looked like ghosts, but I’d like to revisit early on a morning to get a better look.

Leaving the emotion behind, I chose to walk along the river before searching for food. There is an upside down ‘sacrifice’ pig in the river. After some googling (I love alternative art) I found that it was created by Mateusz Okónski, who put it in a position to be lit ablaze. Signifying renewal and purification, it’s the perfect statue for a city which has bounced back from so many horrific acts in history.

4 days is not enough to even scratch the surface of Krakow. Every time I thought I had seen everything, I would turn a corner and find something new. I had thought Krakow would be similar to Bosnia, given the huge part the city played in world war 2. Instead I found it to be similar to Prague but less touristy, cheaper and a lot friendlier. I would, without a doubt, return to Poland in a heartbeat. Krakow is mystical and enigmatic, I can’t wait to return and explore more. If an adventursaurus can fall in love with a city so easily, it has left me wondering when I can return to see more of Poland.

One thought on “A dinosaur in Krakow”