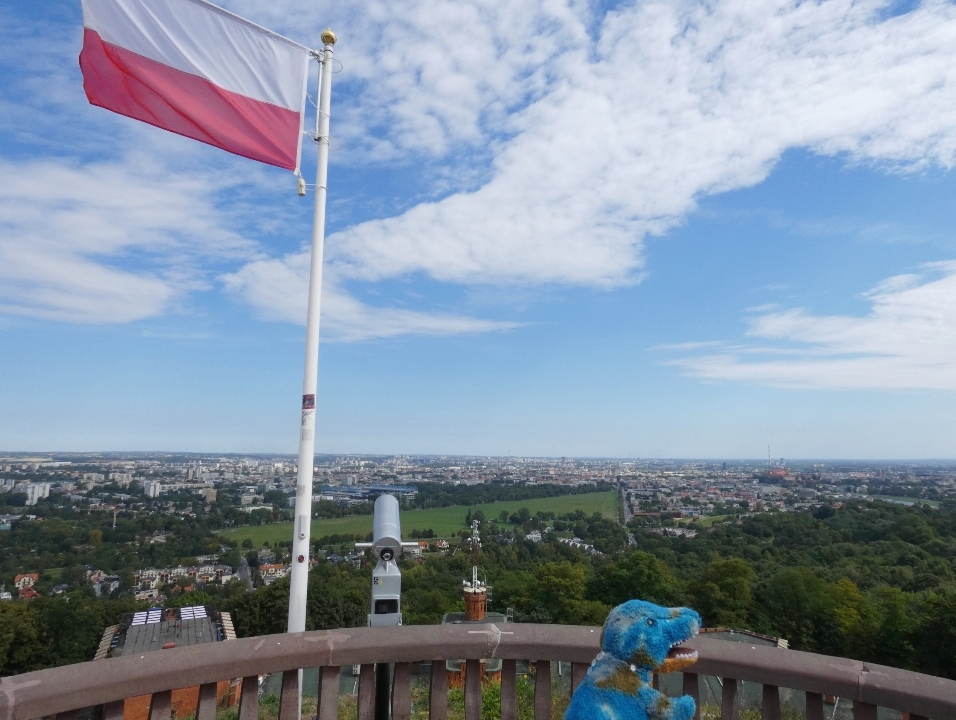 I know you will think I am mad, but you can actually hike in Krakow. There are some really beautiful places on the outskirts of the city. For some reason, they aren’t really advertised or promoted as places to go (not in English at least). Some walking routes are longer than others and you need a map or route to follow. I chose a shorter one where I didn’t have to do loads of planning beforehand.

It’s no secret I love cities which are green and Krakow’s citizens take great care of their parks and outdoor spaces so everyone can enjoy them. With September temperatures of 23-28 degrees, I found it was the perfect temperature to explore Krakow’s open spaces.

There are four Kopiec “mounds” spread across the city, two prehistoric and two are slightly more modern. A Kopiec is a mound of earth piled over the top of the grave of an important person. Unlike a typical grave site, walking up the mound to enjoy the view is allowed. The two more modern Kopiecs are located in Bielańsko-Tyniecki Landscape Park, not too far from the zoo. Kopiec Józefa Piłsudskiego is further from the city but is free to visit. I chose the closer Kopiec Kościuszki as it is attached to a museum which explains everything about the site.

My walk led me from my hotel west towards the huge Jordana Park. I walked through the park enjoying the statues of famous humans (sadly no dinosaurs) and the curated flowers. You could be anywhere in this park, it’s just so peaceful. I loved seeing all of the mini humans doing their lessons outside, what better way to learn about nature than to be outside surrounded by it. The park even has its own swimming pool, but I didn’t use it because dinosaurs can’t swim. My favourite part of the park was the tram, it is Tram line 20 which goes through an avenue of trees. The older blue tram was running on the day I visited, and it looked so pretty in the late summer sunshine.

I waved at the passing trams and then headed over a large playing field, known locally as Błonia. This area of Krakow has a beautiful view of Wawel Castle. It was a huge short cut on my walk which I was grateful for. This led me to a cute yellow bridge over the River Rudawa. 20 minutes outside of Krakow city centre is the most beautiful part of Krakow (in my opinion). Kopiec Kościuszki is well signposted from this point. I was pleased to find this as you leave the road behind and head into the forest.

Steps lined by trees lead you up a path which is reminiscent of Narnia with the gas lamps, I can imagine in the snow this is simply magical. The path leads up to Diabelski Most, a really old bridge where the devil appears nightly. I am happy to report I didn’t see anything scary. The path joins another more popular route which originates at Wawel Castle. After this there is a long 800m climb and a steep set of stairs to conquer. For this part I supervised my photographer from the backpack (and had a quick snooze).

Entry into Kopiec Kościuszki costs 20 złoty (£3.71). Once again, I have struggled to adjust to the money and initially thought this was quite expensive but it really wasn’t. This included entry to the museum, mound and garden. There is an extra charge for entry into the wax museum, which my photographer and I decided not to visit. We spent ages in the museum as it gives an incredible insight into Krakow’s (sometimes gruesome) history. One room was very creepy because there were black figures in a dimly lit room. My photographer ran through this room as they thought the figures were ghosts. The museum takes you through the life of Tadeusz Kościuszko, culminating with how he influenced present day Poland. At first the museum seemed to focus on war as Tadeusz Kościuszko played a big part in the military. But, I went on to read he was also a teacher, politician, traveller, activist in the field of freeing slaves and treating Native Americans with respect.

The mound was built between 1820-1823 and still looked really modern to me. Around the bottom of the mound is a garden. However, it was out of season and very few flowers were colourful. I did love finding the copper roof of a church, it contrasted with the surrounding green perfectly.

Two paths snake around the mound with both meeting at the top. It isn’t a long walk, but it does get steep towards the end. The view gets better and better as you are 326 metres (1070 feet) high. I visited on early on a morning and it was incredibly clear. From the top it shows how big Krakow actually is, I spent a lot of time using this to get my bearings. In the distance lie the Tatra mountains and the gateway to Slovakia. Seeing them up close made me more excited for my upcoming road trip.

As expected, the walk back down to the road was a lot easier than the hike up. It was getting busier, so I decided to do a loop of the bottom of the mound on my way out. A team are currently excavating a site to the left of the mound. I’m not sure what it was as the signs were in Polish, but it was a huge area. Leaving the museum and its grounds I headed back into the forest. This part of Krakow is worth visiting, especially by foot or by bicycle as it allows you to see the beauty of Krakow and Poland without having to go far from the city centre. In total I walked just over 5 miles starting at my hotel and ending in Rynek Glowny (main square) where I decided I had earned something delicious for lunch.