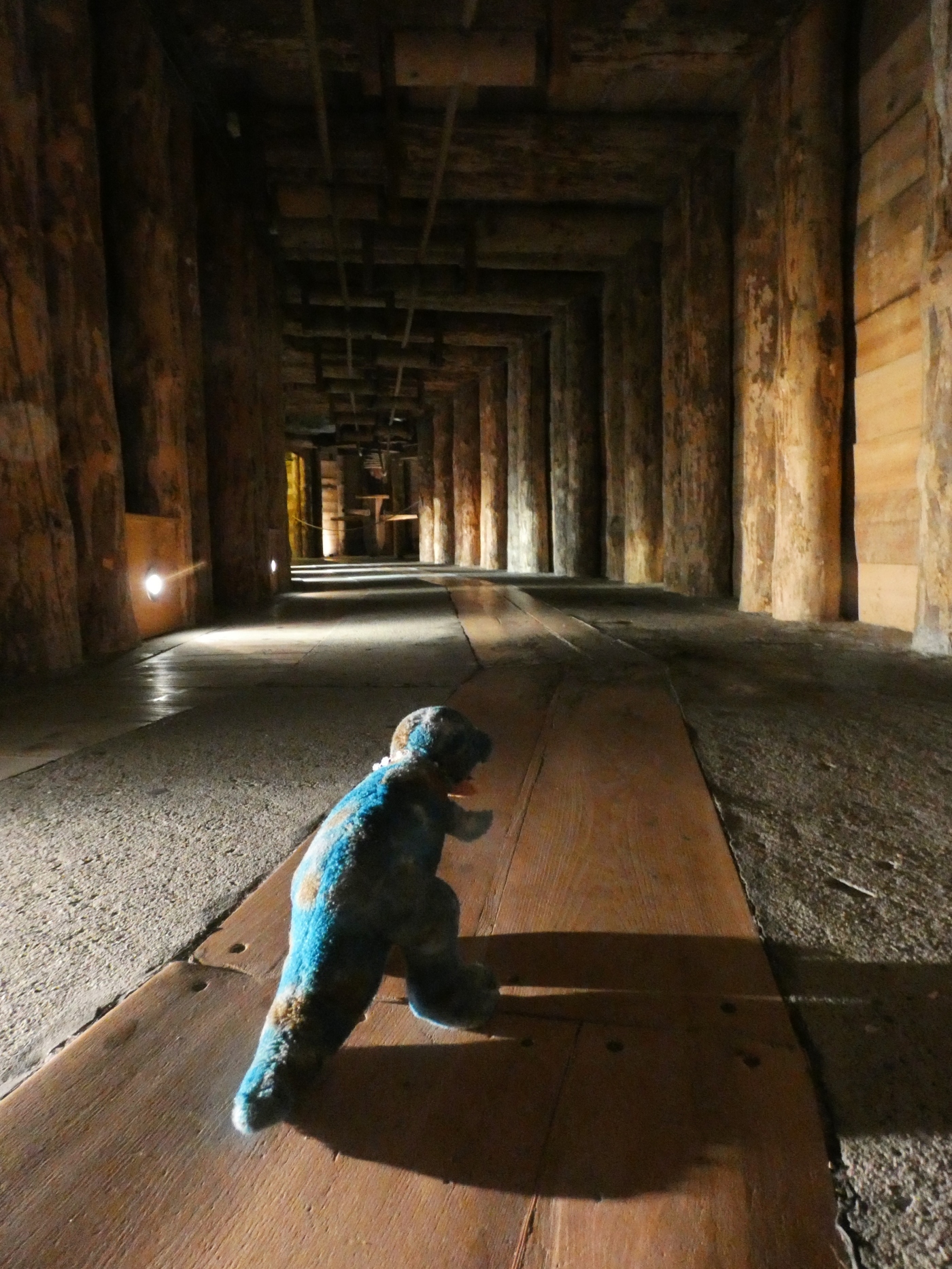 A short drive took me to the most famous tourist site in Poland. I booked with the concierge in the hotel and chose an early tour to the Wieliczka Salt Mine. It was a nice drive through the outskirts of the city, but it seems as though Krakow has grown so big soon Wieliczka will be a part of it. The bus dropped me off in the car park/ train station and I was led up the hill be a tour guide who informed me of what would happen during the morning. I hadn’t expected to see crowds at 9 am, however it does make me wonder how busy this attraction gets in the height of the summer. There was a 15 minute wait to go into the mine as only a set number of humans are allowed in at a time.

I enjoyed the wait as I could sit and enjoy the sunshine before heading underground. I was introduced to my tour guide and given a radio to hear what he was saying, along with a number. The group entered the mine via a set of stairs, 380 to be exact. However, one member went in the lift because they were unable to walk down stairs. The mine also does altered tours for anyone who has problems walking, something I wasn’t expecting to see in a mine. The staircase was very steep and took 5 minutes to walk down.

I was surprised that at the bottom of the staircase I was greeted by a tunnel that had a high ceiling and was well lit (and cold). It was interesting to see how the walls were held up by wooden poles, a technology dating back hundreds of years. I was pretty apprehensive about being so far underground, 64 metres, little did I know we were about to go deeper. The first passage I walked through, Danilowicz Shaft, dated back to 1635. The guide gave me a lot of information about how salt was mined here for 700 years.

Passing through the tunnels and 23 chambers of the mine, I was told about the legend of Princess Kinga who brought salt to Poland. The 13th century was when the first shafts were dug and the Saltworks castle was built. I even had a look into one of the many beautiful chapels in the mine, which is complete with a salt chandelier.

Part way into the mine, I passed a celebrity Nicholas Copernicus and also a King. I wasn’t expecting to see anyone in the mine. I also enjoyed seeing the statues depicting how humans and horses worked in the mine centuries ago. Heading through white corridors of crystalised salt and beautiful sparking grey walls (which taste salty when licked, I tried). Took me down to another set of stairs, it was time to head deeper into the mine.

I passed through some small chapels; St Anthony, Janowice and Holy Cross Chapel, which were filled with religious sculptures made by the miners out of salt and wood. Some had been there over 300 years. Other chambers contained information about how salt was transported out of the mine.

The mine impacted all of my senses. Seeing raw beauty of this natural wonder, making the walls black, grey or white. I loved going through the lofty vaults where white crystalised salt glistened over black rock like the stars. There were mysterious nooks, hidden corners, closed off tunnels and wooden staircases leading deep into the earth.

Halfway along the route was a huge chamber, lit up be three huge salt chandeliers. It is the chapel of St Kinga, a working church which has 2 services per day. The chapel is filled with an air of grace and beauty, the sculptures looked like marble but were actually salt. It was truly beautiful and I loved that there is a Da Vinci painting carved into the wall. After I said a small prayer and hello to Pope John Paul II (the statue not the religious figure) I was off on another adventure further into the earth.

The third level of the mine is 135 metres deep and contains two salt lakes. The first is the most beautiful shade of dinosaur blue! It is named after a Polish engineer who helped to create some of the sculptures in the St Kinga chapel. The Erazm Baracza Chamber is located at 101 metres below the surface. I thought I would have to go somewhere warm and tropical to see water that colour.

Heading further down the mine to 135 metres took me through another large chamber which is propped up by several wooden beams. The Jozef Pilsudski Grotto was created in the 19th century contains another lake which reflects beautifully. At the end of the tour I walked through a small museum and a large hall which hosts weddings and other events.

The scariest part of the whole adventure was the lift back to the surface. It was tiny and 9 humans were squished into each of the 4 compartments. I had to act as my photographers therapy dinosaur because I was not scared at all! The lift was very quick and only took 45 seconds (my photographer said it was a long time). Finally I was back in the sunshine and to head back to Krakow.