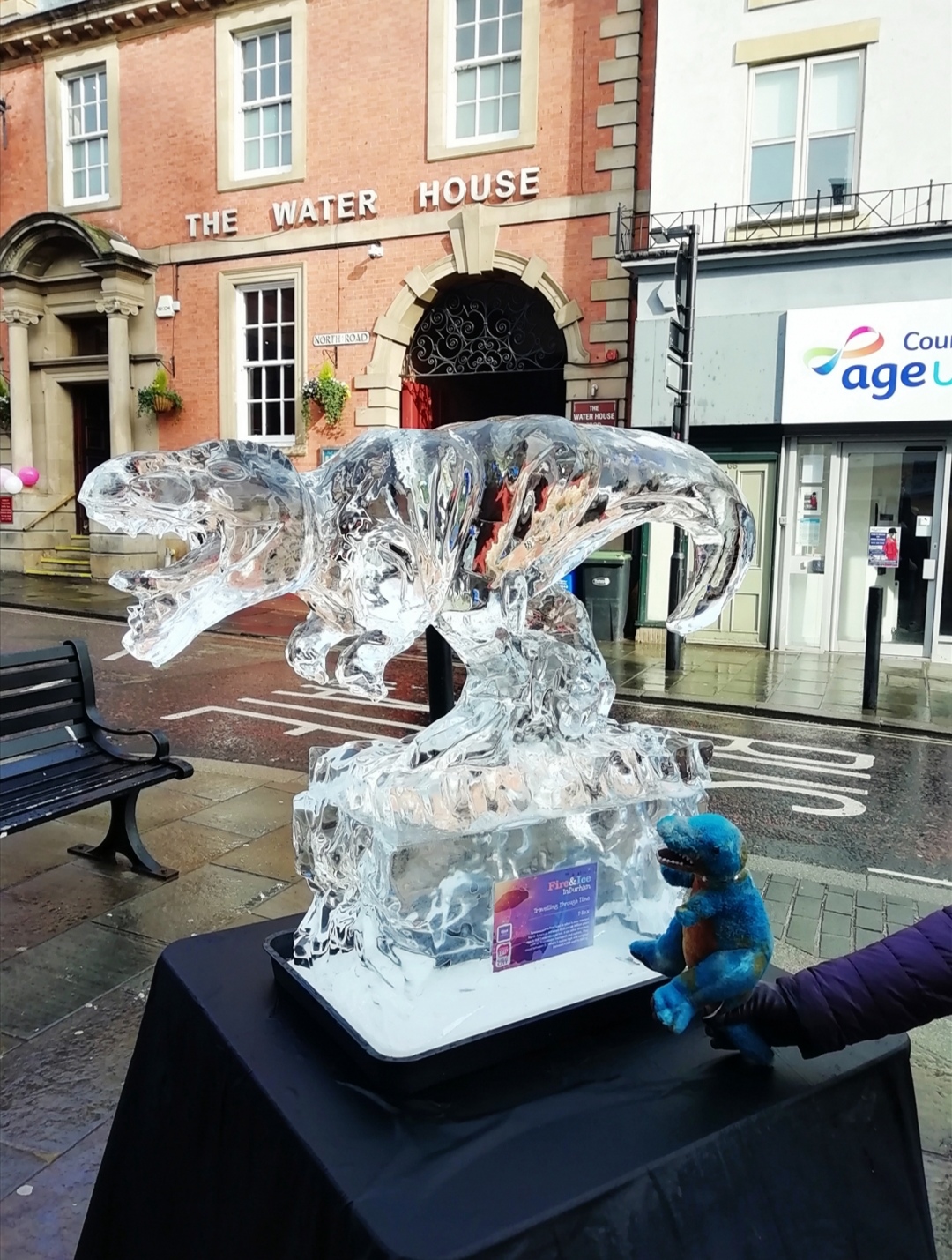 February 22nd was absolutely freezing as you can imagine. A fitting time to follow a fire lit trail in search of ice sculptures. A Festival of Fire and Ice has become a yearly spectacle in Durham, this years theme was travelling through time.

I received a map when I reached the centre of Durham and promptly spotted a Tardis, though Dr Who was no where to be found, he must have been chasing an alien! I was surprised the first sculpture was so easy to find and rather disappointed because I was looking forward to exploring.

The next stop was near the shops, standing unobtrusively against a wall. I thought it was a misshapen lighthouse, it wasn’t. Durham has a rich mining heritage, each summer there is a gala to celebrate all of the pit villages; wrinkly human has strong ties to one. The miners lamp acts as a beacon to keep the workers safe and guide them home.

Slightly further up the path I found Stephenson’s Rocket. The train blew steam just as I arrived. I think I was lucky to see the ice train just before it headed off on a journey.

Next up was a walk up a big hill towards Durham Cathedral, Harry Potter was filmed here (my photographer was very excited about this). It is a huge grand building which overlooks Durham. The first ice sculpture was a circular image of the cathedral. The second was more of a challenge to find, I was excited to find an ice sculpture hiding in the medieval cathedral.

Not only was I pleased to be inside, out of the February freeze, though it didn’t last long. My photographer decided we should go to the cloisters, famous for the scene at the end of Harry Potter and the Prisoner of Azkaban. It’s a beautiful and graceful area, also the area where I found the Eye of Agamotto.

After all the searching for ice sculptures I realised I was rather hungry. There is a restaurant by the Riverside which is an old favourite of my photographer’s. We arrived to find the queue huge, instead I decided to continue my search for ice art.

I spotted a viking longboat on the bridge which was so intricate but sadly starting to melt. Next up was a steam punk timepiece hiding under a flame which was leading up to the Delorean; I think it was the car from back to the future.

I only had three left to find, my photographer said I would love one of them (that made me more determined to find out what it was). Sadly, the astronaut had melted prior to my visit so instead I headed off to ice sculpture number one. I was expecting a spaceship or some type of time travelling machine. Instead I was greeted by something way more exciting, A Dinosaur and not just any dinosaur. It was a T-Rex just like me… Well he wasn’t as blue. It was the best sculpture to find but it made me really sad to see Dino melting.

All of the excitement of seeing a dinosaur was nearly too much. Until I headed back to the town square to wave hello to the ice miner. I also managed to make some new feathery friends. I disliked seeing people paying to hold them, but it was nice that they weren’t in cages.

Even though it was absolutely freezing I was glad that I visited the sculptures nice and early because they were melting by lunchtime. If I visit again I think I will visit on the opening day so I can see the sculptures at their best.