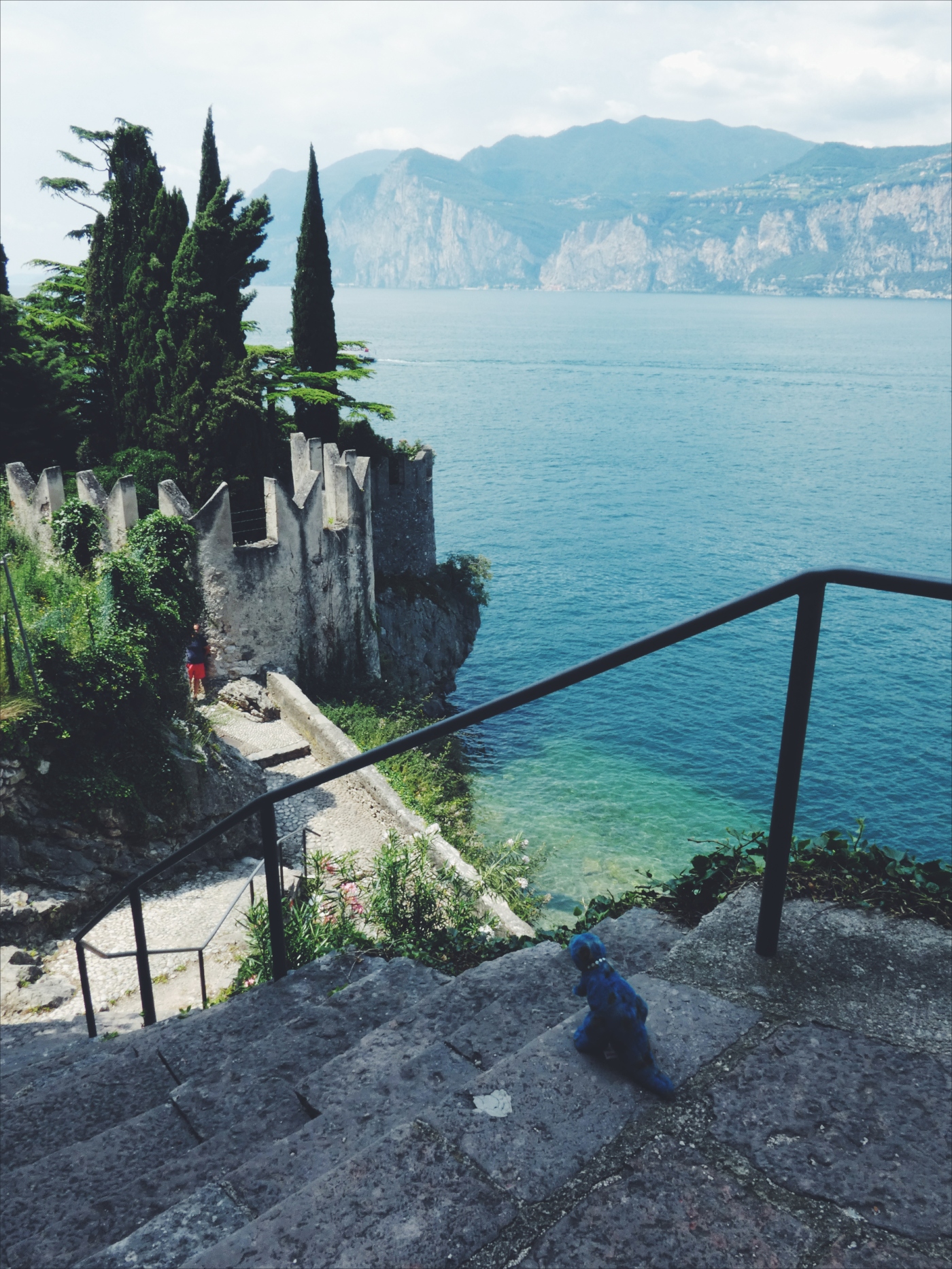 After my break from civilisation in the mountains, I began to explore the medieval town of Malcesine, which is lucky enough to have picturesque views across Lake Garda and also a beautiful backdrop of Monte Baldo.  It is a small town on the eastern shore of the biggest Lake in Italy, often advertised as a tourist resort which is full of tourists gorging themselves on ice cream.  From the cobbled streets to the castle, I found Malcesine to be both quaint and quiet even with many tourists wandering around. 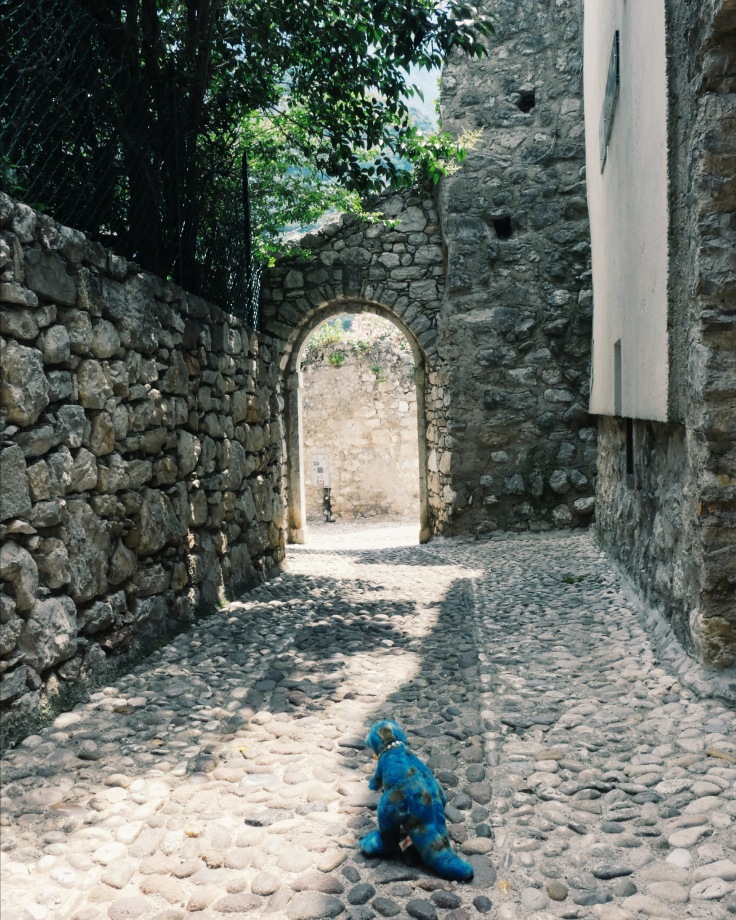 There are many cobbled streets to get lost in, however they all seem to lead to small coves or jetty’s. Personally, I found the views from the lakeside in Malcesine to be some of the most picturesque on Lake Garda because the northern part of the Lake is reminiscent of the Norwegian fjords.

The town itself gives off the vibe of Venice, cool and sophisticated combined with a vintage, relaxed vibe.  The aroma of herbs and fresh lemons floated around the cobbled streets (delicious).  Although most of the streets are cobbled (they are very slippy in the heat), don’t worry if you struggle walking on them, there are alternate routes to the town centre which are paved. 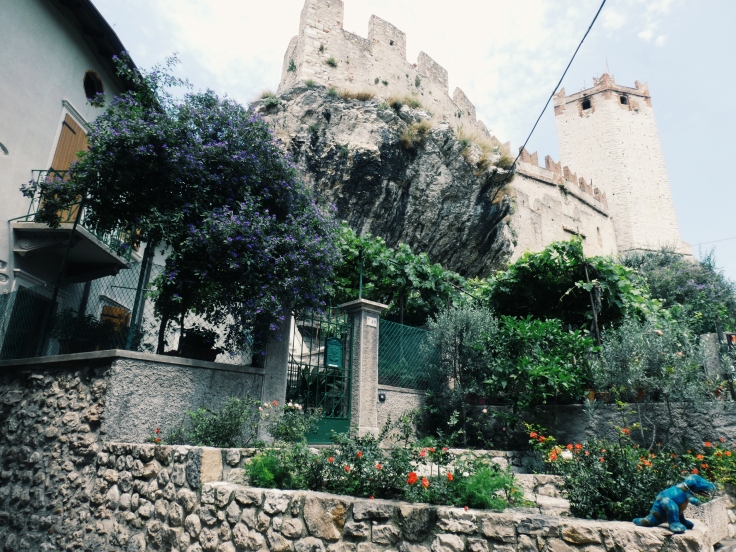 There are many cafes, restaurants and gelaterie in the pretty squares throughout Malcesine.  During my visit, I tried two very different places to eat (both vegan and veggie friendly!). 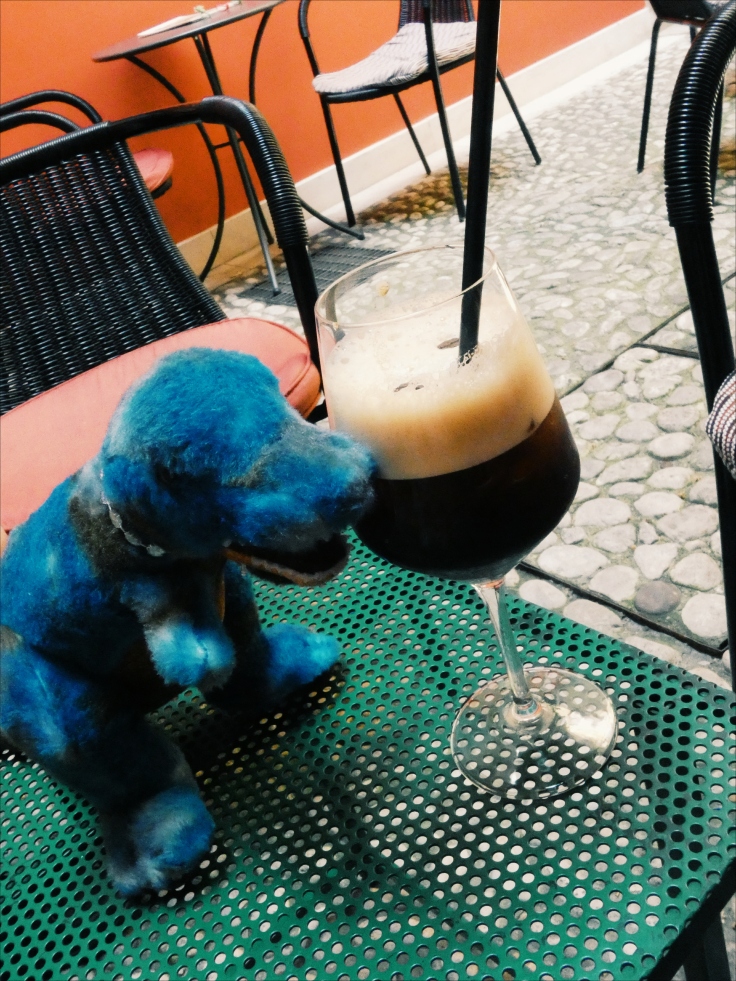 The first was a tiny cafe called Il Punto (Via Borre) on the way down to Porto Vecchio.  This is hidden down a small medieval lane, a ten minute stroll from the castello Scaligero di Malcesine. At first glance it looks like you have to sit on the street, but, in all fact there is a really cute little courtyard inside. Very reasonably priced the iced coffee came in a wine glass and the sandwiches were huge (and very delicious). Well worth getting lost for.

After my break in the shady courtyard, I decided to stroll down the medieval lane towards the old port (Porto Vecchio) – going down the bank is wayyyy easier than going up the hill!

Porto Vecchio is a small and quiet spot to enjoy the views towards Riva del Garda, watch the ducks and see some curious sculptures. From here I chose to take a different route back towards the town and ended up at the Castello Scaligero. A thirteenth century castle which overlooks the town and Lake, you can pay to look around but there was a wedding on, on the really hot day I visited so I decided to give it a miss.  However, the views on the walk up to the castle were very beautiful and there were many seats around for everyone to soak up the view.

From here I  took a wrong turn and walked down a small path, I wasn’t sure where it would lead.  But, the houses were covered in beautiful pink flowers that were too pretty to turn back from.  After all I am an Adventursaurus and my detour lead me to the bottom of the castle and a hidden cove. 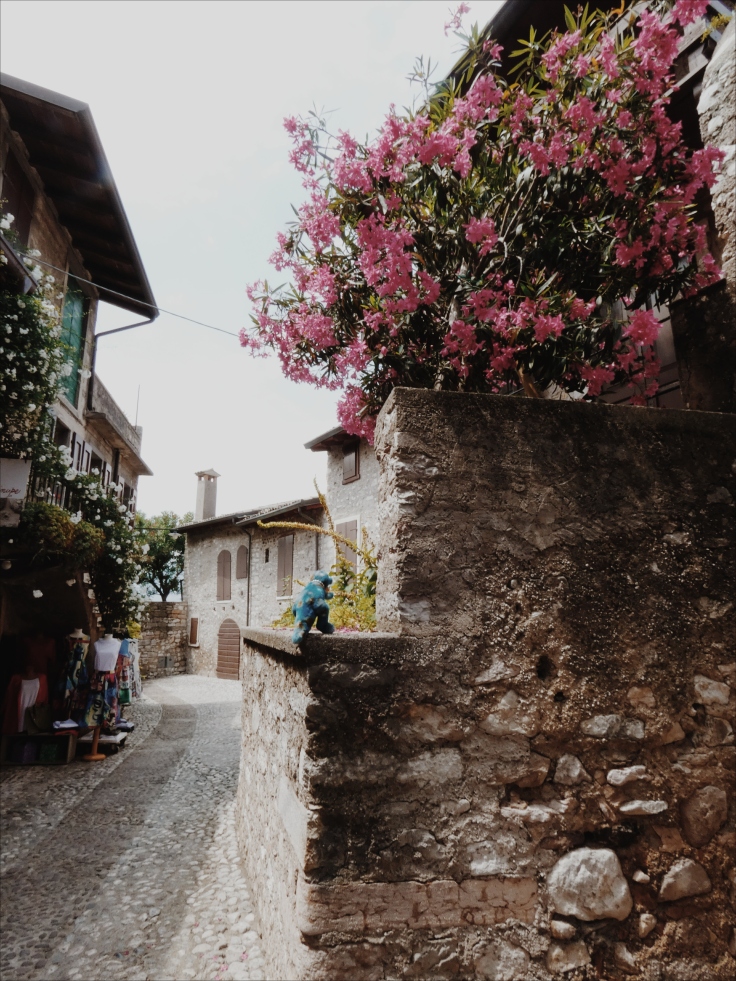 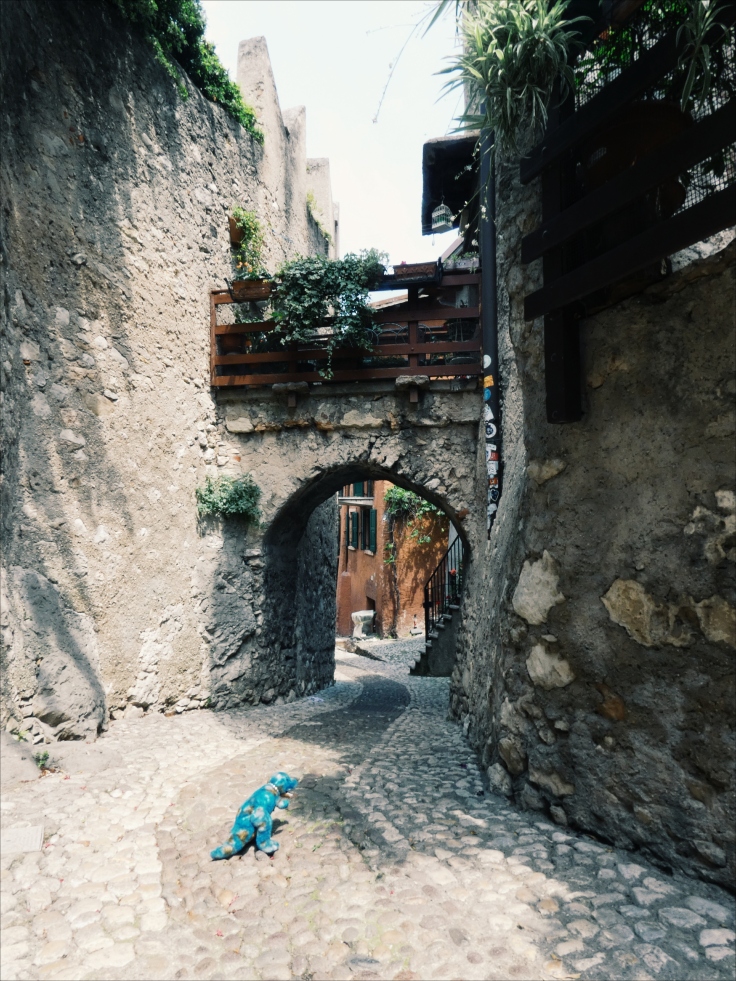 There were some steps which lead up to a small side door into the castle. I walked up it, very very very steep and the steps are rather crumbly. If you have any problems walking then maybe avoid doing this! 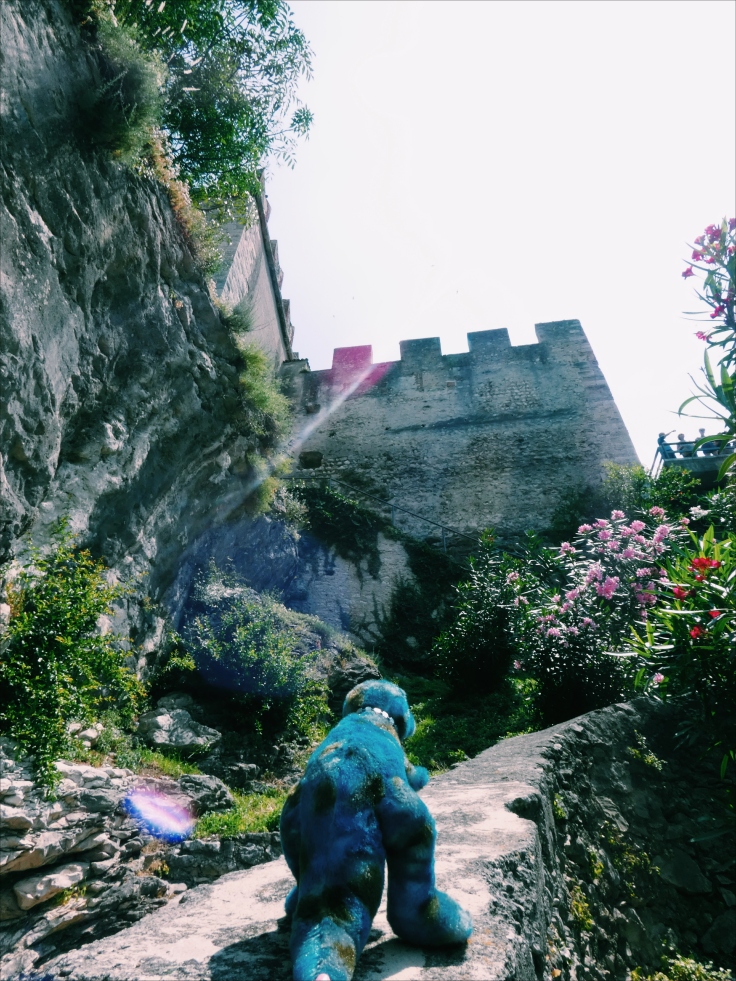 After wandering around the town for an hour or so, I decided it was time for another break. I struggled to choose where to go because there is a massive selection of eateries. Finally I decided on Re Lear in a small Piazza. I mainly chose it because of the beautiful conker tree the tables were under. The coffee was possibly the best coffee I have had in Lake Garda, solely because the cups were a decent size (self confessed coffee addict here!). 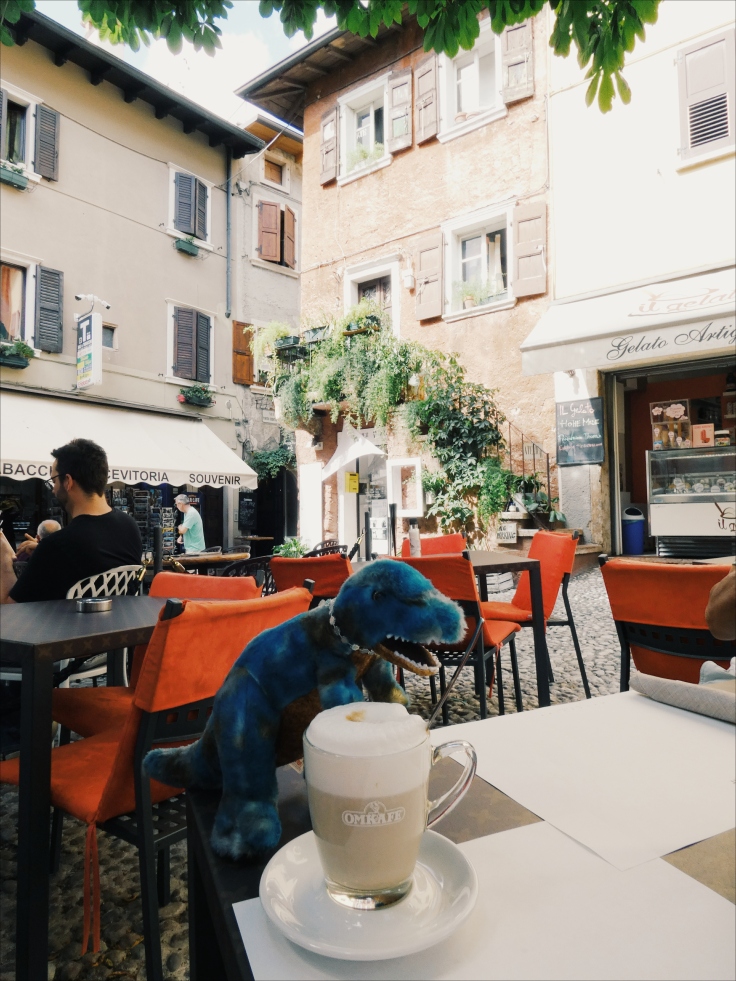 My final stop whilst in Malcesine was the fifteenth century Palazzo dei Capitani, I only went in this because I saw many people going through a grand old doorway on an otherwise quiet street. I’m grateful curiosity got the better of me and I went in. I couldn’t work out what all of the fuss was about when I walked in to a dark and cold room, but as I got further through it the gardens began to appear.

The gardens didn’t disappoint and the building from the lake side was very beautiful and was reminiscent of Venice.

Unfortunately it was so busy I couldn’t take a very good photograph of the gardens. But, I’m using it as a great excuse to visit again one day in the future.

I’ve really enjoyed my time on Lake Garda and I have managed to explore lots of unique and beautiful places.  But, now I’m going to my next Italian destination where my birthday surprise will be waiting for me. I’m so excited!

Wandering re-establishes the original harmony which once existed between man and the universe. – Anatole France