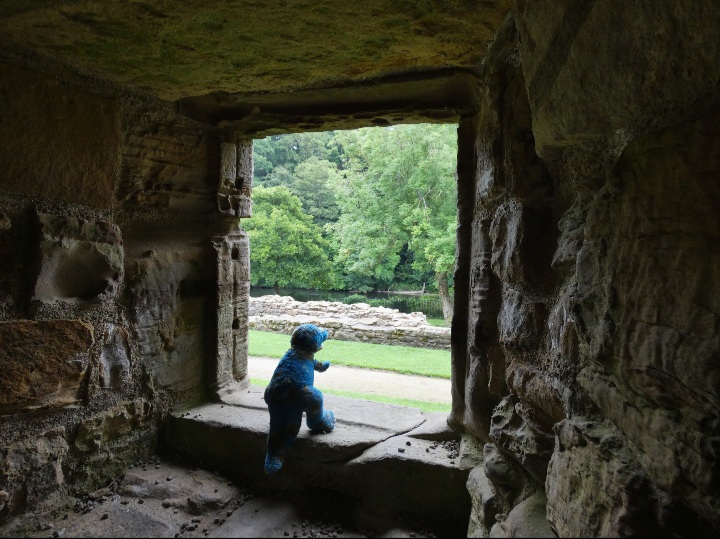 Felled by fire four hundred years after the site was settled on by a sailor.

This is an area so famous, that I simply had no idea it was there. As neither my photographer or I knew this place very well, we brought wrinkly human along. He used to come to the Finchale/ Cocken woods area to swim in the river a few hundred years ago when wrinkly human wasn’t so wrinkly. Local knowledge is far better than a guide book because there are often lesser known stories waiting to be heard. I usually expect to have to pay an entrance fee when visiting historical sites.

If you park by the side of a quiet country lane it is free (walking is a little more challenging on this side). I quickly noticed two paths leading into the woods. Choosing the less steep path turned out to be a great idea, though it led to a different place than I was expecting. I love walking through woods especially when it is sunny. Best part is I didn’t see a human at all! The track itself led towards the river through a mile long gentle descent.

Finally bringing me out at a beach on the River Wear. It was a lovely peaceful place to spend an afternoon, though there was garbage everywhere. I chose to ignore the mess and enjoy a moment of peace. Two herons flew past whilst I was sitting quietly, I got a shock how big the birds actually are. I even managed to spot their nest a little further up the river. A few nosey squirrels even came down to say hello.

Wrinkly human was beginning to get concerned because we couldn’t see the Priory at all. So we decided to retrace our steps and head further along the river. It turns out we had simply gone left instead of right. Another 10 minute walk along the riverside led us to a bridge. Wrinkly human told us there was a charge of 2 pence to cross the river. This worried me because I had already spent all of my money on snacks (I have no regrets). Luckily, the toll charge is now gone. Turns out the last time wrinkly human crossed this bridge was in the 1950’s (or did he say 1590’s?).

The bridge is really old and rickety but is safe enough to cross. I spotted a café with some exciting things outside. Sadly the café isn’t currently open (due to COVID-19 restrictions). But, you can still pose on the flowery Kawasaki and the old red telephone box. The phone box is still working but you can’t go inside as the flowers are blocking the door.

Reluctantly, I left the phone box and headed through the gate into Finchale Priory. This English Heritage site is free to visit but you have to check the opening times as it gets locked up at night.

We arrived just after 9am as my photographer wanted the sun to be quite low in the sky. I was secretly hoping that it would be a little bit quieter. Turns out we had the whole site to ourselves. Well except for one nosey seagull. Tranquillity is not something I associate with the North of England. But, it was incredibly peaceful sitting on the grass with the sound of the trees and the river floating in the background.

The whole of Finchale Priory is open to walk around (except a few staircases which are unsafe). The big stone doorframes are in great condition and I spent most of my time wondering who had walked through these doors over the years. Finchale was founded in about 1112 by Saint Godric who led a truly exciting life (you can read about it here). St Godric is possibly my favourite saint due to all of the kind deeds he did for the surrounding animals and humans. Finchale evolved from a hermitage to a priory and finally becoming a holiday home for the monks based in Durham.

Sadly, the area was victim to the dissolution of the Monasteries in 1538, a tragic event started by a man throwing a tantrum (humans need to learn to get over their anger in a better way). As a dinosaur, I can’t begin to imagine why anyone (human or dinosaur) would want to destroy such a beautiful and peaceful place. I am pleased the ruins have been so well preserved. Although you can spot some of the priory’s stone in surrounding farmhouses.

My favourite part was the kitchen because they had a perfectly formed stone dinosaur bath. The stone slabs show where the oven was and where the knives were used. I was surprised to see how similar the kitchen was compared to what we have now.

I had a lot of fun looking through the windows and doorways. But, one doorway was holding my attention more than any other. It took me down into a vaulted undercroft. We visited on a day where it was 25 degrees in the sunshine, but I thought the vault was absolutely freezing, neither human felt cold at all. My Photographer kept refusing to walk to one side of the building as they felt as though someone was standing by the ancient fireplace. Someone touched the back of wrinkly human’s head. Thoroughly spooked the three of us returned to the sunshine. Suddenly the weird feelings had disappeared. I wonder if we encountered a ghost of one of the monks.

As we were walking around the site, wrinkly human kept telling us what room we were standing in. My photographer and I were simply amazed that wrinkly human knew so much. But it just turns out he was reading the signs which were too high up for me to see. Here’s one below.

We headed around the back of the building to get a better view of the old windows. They must have been stunning when they had stained glass in them. Passing through the refectory and up a small flight of stairs, I found a dinosaur sized doorway. Maybe it was for St Godric’s animals when they came to visit.

Finally we headed back to the main alter, wrinkly human told me to watch where I was walking and stay near the walls. All of a sudden there was a cold draught passed by, it had appeared from nowhere. No human I was with is particularly religious, but wrinkly human all of a sudden announced “it is time for the mass procession”. I googled this when I got back to HQ. Turns out wrinkly human was correct, 10am is the time for daily mass.

Realising we were completely alone and in the warm sunshine, frightened and unwilling to admit it. We decided it was time to head off in search of breakfast. It was only once I had sat down with a coffee I realised how calm and energised I felt. Turns out the ancient holiday home is still providing a place to destress hundreds of years later.