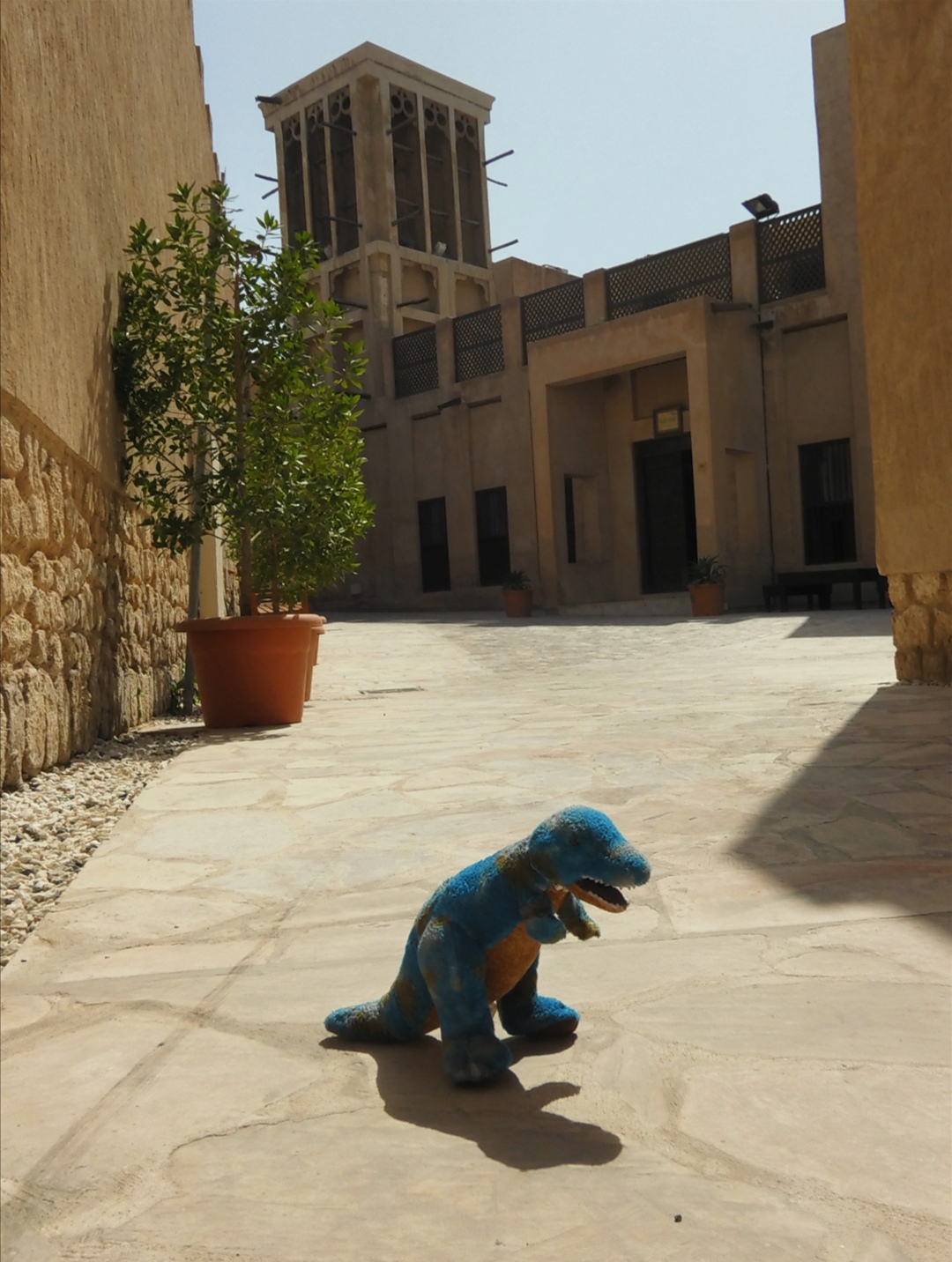 My metro day pass proved to be rather useful. After spending so much time of this trip in modern Dubai, I found myself wanting to see the older side of the city. The view from the Dubai Frame really sparked an interest; especially the promise of a boat ride. Leaving the Frame, I took two metros over to Al Fahidi station.

The Bastakiya Quarter is a world away from the Dubai I know and love. Leaving the metro station I felt that I was in the Middle East for the first time. The whole area feels distinctly Persian; the shops are home to shoemakers, food wholesalers and furniture makers. Each launderette had rails of intricately patterned outfits from a range of cultures. The sari’s in the window provided a splash of colour to the sandy apartment blocks lining the road.

After a rather stressful experience crossing the road, I learned the hard way that the cars don’t stop at crossings like in Dubai Marina. Facing the entrance to Al Fahidi Historical Neighborhood, I darted past a human holding a menu and ran down a back alley into the shade. In hindsight I should have gone into the restaurant as it was the famous and well recommended Arabian Tea House (and yes they serve camel burger and camel milkshakes). I love being amidst the shady back lanes which twist through the sandy buildings, occasionally turning into a square. I can see why they created Madinat Jumeirah. The sandy buildings with their wind towers and ornamental doors are as unique as the art galleries within. The buildings are typical of Iranian coastal towns.

Before tourism took off and oil was discovered in the area, Dubai was vastly different. Tribes of Bedouins lived as farmers, fishermen and as Pearl divers. Remnants of history are dotted all along the Dubai Creek; especially in Bur Dubai. The Iranian community arrived in the 19th century and built the area to trade. Many of the buildings were made using coral and shells, some surviving to this day. Heading towards the water via the textile and perfume souks was a rather stressful experience. Though I’d have loved to stay and look in the shops longer, I couldn’t cope with the humans wanting to sell me stuff. My favourite was shoes for 99% off.

Wanting to escape and never saying no to the chance of going on a boat, I jumped on the first Abra I saw. Not really sure of where I was headed I chose to enjoy the view of the old buildings. The newer skyscrapers kept peeping out behind the wind towers. Best part about the Abra ride, minus the lack of sides on the boat, was the cost. 1AED (£0.19) took me on a 15 minute ride to Deira on the other side of the creek.

The Souks of Dubai are separated down several different alleys. I hadn’t expected how busy it would be. My senses were overloaded by the smells, colours and noises. I tried to visit the spice souk; a sneezetastic walk which resulted in turning back quickly. The second souk, the gold souk, was one of the places I was most looking forward to visiting. But, I got scared and my travel anxiety took hold. Suddenly the need to escape was overwhelming. Dinosaurs don’t often run, but that is exactly what I did, all the way back to the waters edge.

Needing to calm down and recalibrate my anxiety levels I took a walk along the waterside (mainly to watch the boats). I headed all the way to Al Ras Metro Station. I was glad to see the air con whilst I sat watching old Dubai become New Dubai from the window of the metro.

One thought on “Authentic Dubai: Al Fahidi, an Abra ride and Souks”